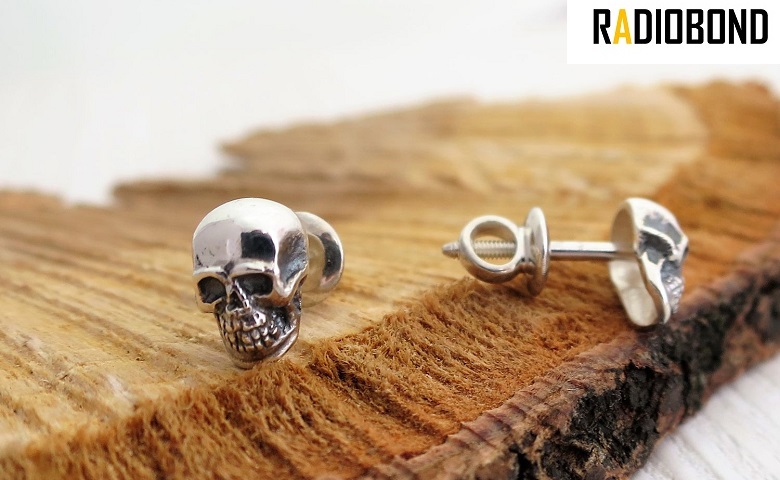 Men’s earrings are original and sought after jewelry. A man of our time is elegant and bold, he takes care of himself, follows fashion trends, as well as manifests confidence, courage, and inner freedom. When it comes to his appearance, he is not scared to experiment and try something new. A modern man enjoys and appreciates jewelry and knows how to add an item or two to his ensemble. If you’re in search of dramatic, trailblazing, and arresting jewelry, men’s skull earrings are worth a shot.

Today, earrings are a popular fashion choice among men and women alike but initially, they appeared as jewelry for men. In the Stone Age, males threaded bones into the ears to demonstrate their courage and strength. In ancient Egypt, earrings indicated a position in society. African and Australian tribes used earrings in rituals of initiating a young man into a man.

In the Middle Ages, the church banned earrings; however, pirates, gypsies and thieves showed disobedience. In the 1960s, men’s earrings regained popularity thanks to hippies. From that moment, ear jewellery became a sign of originality, creativity, and independence.

A skull is a popular symbol in non-formal subcultures and communities such as bikers, Goths, punks, etc. Despite a kind of eerie look, a skull doesn’t really carry a negative significance. On the contrary, in many cultures, including ancient ones, it denotes immortality, vital energy, and protection against evil forces. If you want to rock a skull in your ears, look closely at these cool earring designs.

Studs are a classic design of earrings for men. Their main benefit is versatility. Such an accessory is suitable for a working ambience, it can become an interesting addition to the romantic image or casual clothing style, and it will look awesome at any party. If you plan to purchase skull studs for daily wear, opt for models made of white gold, platinum, or silver. These are durable materials with discreet silvery finishing. The stud design is ideal for guys with a round face and a short haircut.

Today, this is the most popular and appealing model. Guys confirm that one earring in the ear is a powerful magnet drawing girls’ attention. Single men’s earrings come in different designs but the most common models are studs and hoops. As a material, an earring can carry inexpensive alloys, silver, gold or platinum. Often, single earrings are adorned with sparkling stones for an extra wow factor.

Hoop design has gained great popularity since it is massively endorsed and flashed by celebrities and fashion influencers. Hoops rings create an image of a rebel but at the same time, they successfully complement the romantic style and emphasize creativity and freedom of spirit. All these earrings are round but vary in diameter and thickness. A skull placement is also different throughout the model range – while some designers put little skulls all over the hoop, other models feature a single large dangling skull. The cool thing bout hoop earrings is that you can rock these as a single item or as a pair. For example, Johnny Depp wears three earrings at the same time and this style looks quite amazing.

If you want your jewellery to ooze luxury and extravaganza, diamond skull rigs will definitely nail it. Most often, such models carry a stud design but details often vary. For instance, you can spot a skull with a diamond in its head or brow, a skull with diamond eyes, or a skull face surrounded by tiny diamonds. Loop and dangle earrings can carry precious stones as well but such designs might be a tad over the top. If you are short of money, instead of diamonds you can opt for more affordable clear precious and semi-precious stones (topaz, white sapphire, etc.) or inexpensive CZ stones.

Long gone are days when crosses exclusively associated with Christianity and church. The cross design symbolizes the strength of the spirit and the confidence to repulse life troubles. A cross earring often becomes a talisman to help cope with problems. When featuring both a cross and a skull, such earrings will gain strong protective powers. If you don’t believe in magic and mysterious forces surrounding us, a cross skull earring will become a dashing and bold accessory since both these symbols and controversial yet spellbinding.

This is a bold choice for a confident man who is not scared of attention to his persona. Someone might think that dangle earrings are for girls – well, my friend, you couldn’t be more wrong. In fact, dangle skull designs are probably the most masculine out of all other models. Jewelers design them to look grand, eye-catching, and a bit intimidating, especially if a skull grins, frowns, or is furious. There a few ways to craft dangle earrings but the most popular designs feature studs or loops with a hanging attachment. A skull can be nestled on either part of such pieces

What Is Next? What to do When Your at Fault in a Car Accident
How To Make Health Insurance Affordable For You?
To Top